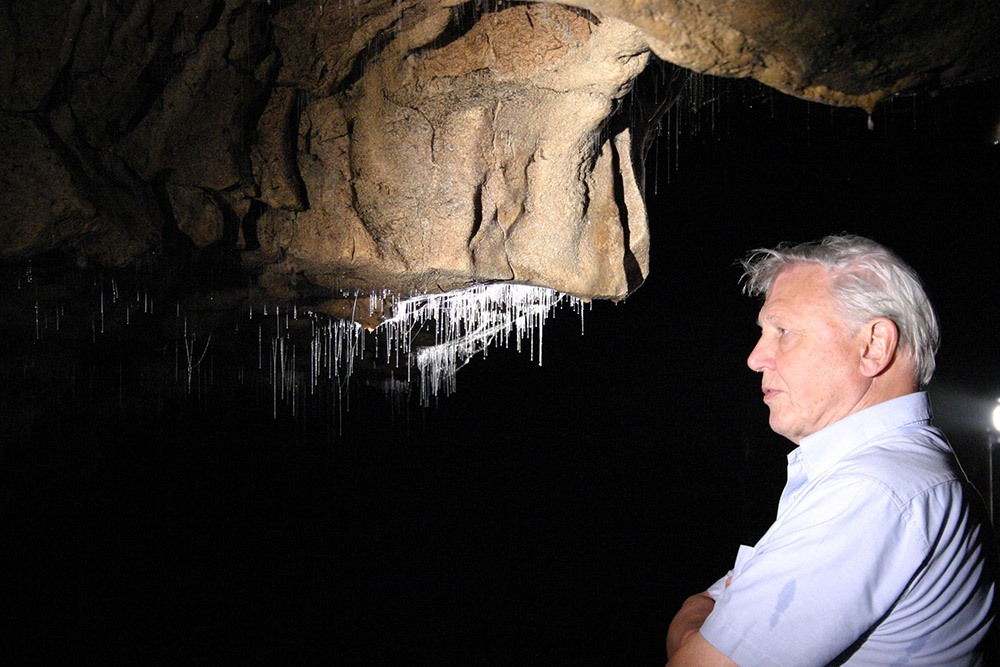 Be spellbound by our caring service, educated guides, and super extraordinary glowworm spectacle. We know the only way to really relish Waitomo’s greatest and brightest glowworm show, is to take your time! Skipping through quickly will not do justice to such a mind-blowing display. Take time to allow your eyes to adjust and you will be satisfied with the soft glow of thousands of glowworms. There are enough to softly light up a whole cave. Our tranquil and calm tour will treat you to the stunning Cave of the Spirit. Stride through an exquisite series of hollows to find speleothems, fossil remains of destroyed moa and cathedrals bursting with natural light, softly falling to the ground. You will have 1 guide, 2 caves to see, up to 12 others in your group and 30,000+ glowworms to astonish you. You can observe glowworms up close, and we will gladly allow you to take photos. Spellbound Glowworm and Cave tours is well established as a valued eco tour. Spellbound has been the number #1 thing to do in Waitomo according to Trip Advisor’s ranking nonstop for the past 8 years. We absolutely hope to carry on into the future providing our visitors customised, entertaining, fascinating and unforgettable tours to Waitomo’s astounding caves, countryside and glowworms.

Waitomo Caves is a small, peaceful town in the Northern King County. It’s confined by hillsides of green grass and indigenous forests, all rather normal at first look, though anything but normal when you start investigating more vigilantly. Our area is chock full of caves, gorges and streams that surprisingly vanish underground. Glowworms occupy the 200+ caves known in the region and also forests and stream banks. Waitomo is a glowworm dream and glowworms are the main fascination drawing sightseers to our town. In 2005, Waitomo became the attention of two BBC film teams, one for the Sir David Attenborough’s Life in the Undergrowth series and the other, for the Planet Earth – ‘Caves’ documentary. Glowworms were the focus both crews wanted to capture. After examining their possibilities they asked approval to film in the Spellbound Glowworm Cave. Thus, Spellbound’s glowworm exhibition is presented in documentaries placing it among some of the most marvellous caves on earth. To take a close look at our intriguing space and go above and beyond for a unique experience. This is easy to do. Captivating back roads and strikingly built paths bring you into astonishing spots. All is described in detail in the Waitomo Discovery Centre. There’s a fantastic variety of accommodation and grub to eat in Waitomo and for the most unforgettable glowworm experience ever, we have brilliant guides to take you underground with Spellbound Glowworm and Cave Tours.

The main components for the formation of caves are limestone (a soluble rock), water and time. Limestone is a sedimentary rock made from calcareous remnants of sea creatures. 30 million years ago, much of the country was underwater, beneath a shallow sea. Wautoma’s limestones are made of the remains of miniscule shell pieces (mostly bryozoans), and a few remarkable deposits of enormous oyster shells, huge scallop fossils also irregularly occur and are found in the limestones at Mangawihitikau. Layers of calcareous rocks built upon layers and condensed under extra layers of mud and sand. The rock we find nowadays was raised upwards by tectonic forces to its current altitude. It started lifting about 5 million years ago and still continues to do so now. Spellbound’s Mangawhitikau/ Oparure block of sedimentary rocks, 6-9 kilometres South of the Waitomo Caves Village, overlay Waitomo Limestones and are evenly tilted at a 5-degree angle towards the South East. As a consequence prehistoric stream ways once ran down the dip, over the surface mudstone rocks and then cut valleys running in a SE direction. Eventually, the Mangawhitikau Stream cut down to the limestone layers below and found its way into one of the regular parallel fractures running to the Northeast and formed the glowworm cave. The outcome – Spellbound’s main river gorge runs SE and the cave systems run NE. Guests of the Cave of the Spirit will find high silt banks at the conclusion of the cave pathway. These specify that in periods of severe flooding the Mangawhitikau Stream has ran along its former streambed. The torrent would deposit fresh sediments and debris inside the Cave of the Spirit, and it would also drive fossil moa remains further into the cave then submerge them into the ground.

NZ glowworms are closely related to Australian glowworms and are quite alike in looks and behaviour. New Zealand glowworms are bigger and have larger lights. They also blossom in much bigger groups. On a Spellbound glowworm tour, not only will you discover more about these captivating and mystic little animals, but also you will see them up close in their natural surroundings. We can show you all their development stages and describe the adaptations they require to live in a cave.

Tour duration is 3 to 3 1/4 hours. Groups are little – up to 12 people. Our tour visits two caves; the first involves a boat ride, and the second is a walk-through cave. We take you on a blow-up raft to see the glowworms. There are no rapids in the cave; it’s calm and peaceful. Our caves are extremely natural; we’ve reformed them as slightly as possible and they are positioned on a stunning, backcountry farm. You will see few other visitors – if any at all. Our tour is worth coming along on just for the drive out there! Tours are ideal for those of all ages and typical fitness levels. Our picturesque strolls are brief and non-compulsory. Please allow our guide know at check-in if you have any fitness worries. The tour does not involve getting wet, using a wet suit or abseiling or river rapids; it’s very easy. The tour occurs outdoors and cave temperatures are cool, even in the summertime (10°C/50°F) so we do advise packing a extra layers and suitable footwear. You are permitted to bring your camera to snap some fabulous sights. Hot beverages and biscuits are supplied. Toilets are also available. We drive out to secluded caves on picturesque country roads, and commentary is given on the way. During periods of flooding the raft may not run for safety precautions.

Our pricing philosophy. Don’t stress about missing out on ‘special discounts’ or ‘deals’, we don’t do the. Instead we feel that honest pricing is key. Our everyday price is great value. We continue at the constant price over the year and it will remain the same wherever you buy your ticket. However, we do make an exception for group discounts. We think it’s a fair family deal to charge for each child at well under half the adult price. We do charge for tots because they will need their own seat in our van.