Cheering on your favourite team is a Kiwi tradition, and New Zealand has professional teams based all over the North Island in various sports.

The Wellington Phoenix. As NZ’s only representative in the ALeague, the Phoenix play most of their games out of Wellington stadium although they do also play games at North Harbour stadium in Albany. 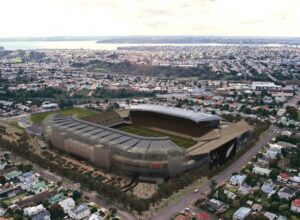 New Zealand’s obsession! Auckland has the Blues, Hamilton has the Chiefs and Wellington has the Hurricanes. They play out of Eden Park, Waikato Stadium and Wellington Stadium respectively. Here are their home fixtures for 2021. Blues, Chiefs, Hurricanes

New Zealand’s National netball competition, the ANZ Premiership has the Northern Mystics based in Auckland at The Auckland Netball Centre in St.Johns, The Northern Stars who are based at Pulman Arena in Takanini, The Waikato/Bay of Plenty Magic who play out of Claudeland’s Arena in Hamilton, Bay Arena in Tauranga and Rotorua International Stadium, The Central Pulse who are based in Wellington play out of TSB Arena in downtown Wellington.

The New Zealand national team play one day internationals, T20s and Test Match cricket at Eden Park , Bay Oval in  Mt. Maunganui, The Basin Reserve in Wellington and Seddon Park in Hamilton. Click here to see their up coming schedule.

Tickets to most games can be bought online through Ticketmaster.